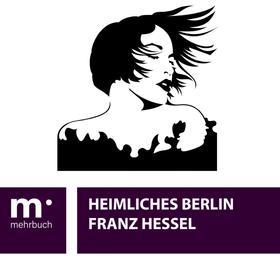 Franz Hessel was born in 1880 to a Jewish banking family and grew up in Berlin. After studying in Munich, he lived in Paris from 1906 to 1914, moving in artistic circles in both cities. His relationship with the fashion journalist Helen Grund was the inspiration for Henri-Pierre Roche's novel Jules et Jim (later filmed by François Truffaut). Their son Stéphane went on to become a diplomat and author of the world-wide bestselling Time for Outrage! In the 1920s and 1930s, Hessel worked as an editor at Rowohlt Verlag in Berlin. Simultaneously, he wrote novels and essays, which were widely praised for their poetic style. He also translated two volumes of Proust's À la recherche du temps perdu into German together with Walter Benjamin, as well as works by Casanova, Stendhal, and Balzac. In 1938, he fled with his family to Paris, then to Sanary-sur-Mer. In 1940, he and his son Ulrich were sent to the internment camp Les Milles. Franz Hessel died in early 1941, shortly after his release from the camp.