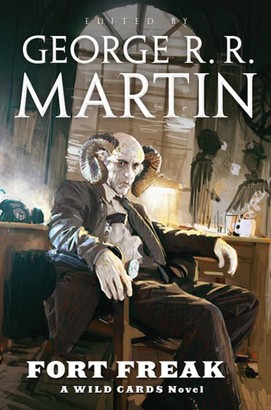 A Wild Cards Novel (Book One of the Mean Streets Triad)

In 1946, an alien virus that rewrites human DNA was accidentally unleashed in the skies over New York City. It killed ninety percent of those it infected. Nine percent survived, mutated into tragically deformed creatures. And one percent gained superpowers. The Wild Cards shared-universe series, created and edited by New York Times #1 bestseller George R. R. Martin (called "the American Tolkien" by Time), is the tale of the history of the world since then—and of the heroes among the one percent.

Now, in the latest Wild Cards mosaic novel, we get to know the hardbitten world of Manhattan's Fifth Precinct—or "Fort Freak," as cops and malefactors alike call the cop-shop where every other desk sergeant, detective, and patrol officer is more than human.

Featuring original work by writers such as Cherie Priest, author of the bestselling Boneshaker; Paul Cornell, Hugo–nominated comic book and Doctor Who writer; David Anthony Durham, winner of 2009's John W. Campbell Award for Best New Writer; and many others, Fort Freak is one of the strongest offerings yet in the ongoing Wild Cards project.

Melinda Snodgrass was a story editor and executive script consultant on Star Trek: The Next Generation. Her acclaimed episode, "The Measure of a Man," was nominated for the Writer's Guild Award for outstanding writing in a drama series. With George R. R. Martin, she cocreated the popular Wild Cards series of shared-world novels and anthologies. She lives in New Mexico.