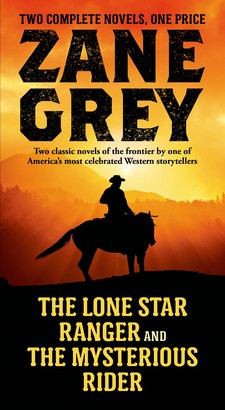 The Lone Star Ranger and The Mysterious Rider

Two Classic Novels of the Frontier

Beschreibung zu „The Lone Star Ranger and The Mysterious Rider“

Two classic novels of the frontier, by Zane Grey, one of America's most celebrated Western storytellers

Buck Duane, gunfighter, was offered a pardon by Captain Mac Kelly of the Texas Rangers, on one condition: Take down the local Chelsedine gang. Many had died trying, but it was Duane's only shot at freedom. When Duane teamed up with the Rangers for a final showdown against the ruthless rustlers, he discovered a secret that could destroy them all.

His name is Hell Bent Wade, a wandering gunfighter and a good man, though one with a violent temper. But it isn't until he arrives at the Bellhounds Ranch, where Bill Bellhounds is about to marry off his foster daughter Columbine to Jack, a cowardly drunkard, gambler, and thief, that Wade reveals the full range of his righteous fury.

After the Bugles
Elmer Kelton

The U.P. Trail and The Call of the Canyon
Zane Grey

Desert Gold and The Light of Western Stars
Zane Grey