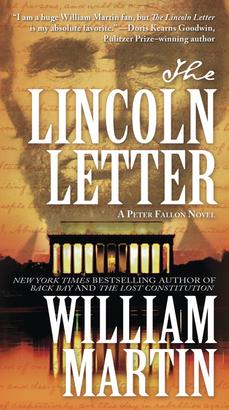 What if Lincoln recorded his innermost thoughts as he moved toward the realization that he must free the slaves? And what if that diary slipped from his fingers in 1862? A recently discovered letter written by Lincoln suggests that the diary exists and is waiting to be found. Some want the diary for its enormous symbolic value to a nation that reveres Lincoln. Others believe it carries a dark truth about Lincoln's famous proclamation--a truth that could profoundly impact the fast-approaching elections and change the course of a nation. Peter and Evangeline must race against these determined adversaries to uncover a document that could shake the foundation of Lincoln's legacy.

From William Martin, the New York Times bestselling author of The Lost Constitution, The Lincoln Letter is a breathless chase across the Washington of today as well as a political thriller set in our besieged Civil War capital. It is a story of old animosities that still smolder, old philosophies that still contend, and a portrait of our greatest president as he passes from lawyer to leader in the struggle for a new birth of freedom.