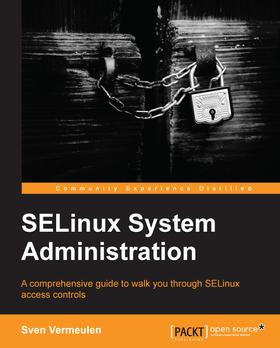 NSA Security-Enhanced Linux (SELinux) is a set of patches and added utilities to the Linux kernel to incorporate a strong, flexible, mandatory access control architecture into the major subsystems of the kernel. With its fine-grained yet flexible approach, it is no wonder Linux distributions are firing up SELinux as a default security measure.

SELinux System Administration covers the majority of SELinux features through a mix of real-life scenarios, descriptions, and examples. Everything an administrator needs to further tune SELinux to suit their needs are present in this book.

This book touches on various SELinux topics, guiding you through the configuration of SELinux contexts, definitions, and the assignment of SELinux roles, and finishes up with policy enhancements. All of SELinux's configuration handles, be they conditional policies, constraints, policy types, or audit capabilities, are covered in this book with genuine examples that administrators might come across.

By the end, SELinux System Administration will have taught you how to configure your Linux system to be more secure, powered by a formidable mandatory access control.

A step-by-step guide to learn how to set up security on Linux servers by taking SELinux policies into your own hands.

Linux administrators will enjoy the various SELinux features that this book covers and the approach used to guide the admin into understanding how SELinux works. The book assumes that you have basic knowledge in Linux administration, especially Linux permission and user management.

Sven Vermeulen is a long-term contributor to various free software projects and the author of various online guides and resources. He got his first taste of free software in 1997 and never looked back. In 2003, he joined the ranks of the Gentoo Linux project as a documentation developer and has since worked in several roles, including Gentoo Foundation trustee, council member, project lead for various documentations, and (his current role) project lead for Gentoo Hardened SELinux integration and the system integrity project.
During this time, Sven gained expertise in several technologies, ranging from operating system level knowledge to application servers. He used his interest in security to guide his projects further in the areas of security guides using SCAP languages, mandatory access controls through SELinux, authentication with PAM, (application) firewalling, and more.
Within SELinux, Sven contributed several policies to the Reference Policy project, and he is actively participating in the policy development and user space development projects.
In his daily job, Sven is an IT infrastructure architect with a European financial institution. The secure implementation of infrastructures (and the surrounding architectural integration) is, of course, an important part of this. Prior to this, he graduated as an MSE in Computer Engineering from Ghent University, and then worked as a web application infrastructure engineer using IBM WebSphere Application Server.
Sven is the main author of Gentoo Handbook, which covers the installation and configuration of Gentoo Linux on several architectures. He has also authored the Linux Sea online publication, which is a basic introduction to Linux for novice system administrators and SELinux System Administration, Packt Publishing, which covers SELinux for system administrators.

Gun Policy. A critical analysis of firearm laws in the United States of America
Murali Mg