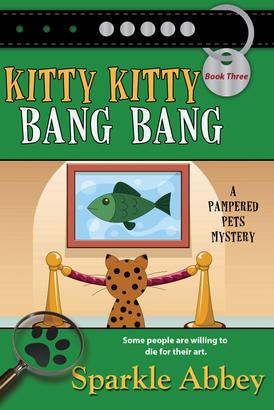 "We were at an art exhibition at The Montage," I told the detective, "and Kitty asked me to take her cats home because something had come up. Something urgent. It seemed strange, but then the whole evening was strange with dogs and cats. Ones that paint, I mean. And Kitty would never leave her cats, but she did, so it must have been really urgent . . ."

Detective Judd Malone looked past me. "Are those the cats?"

"What kind are they? They're huge."

"They're Bengal cats. Bengals are a hybrid. A cross between a domestic cat and an Asian Leopard Cat. It's a relatively new breed. Most have . . ." Malone's face said TMI. Fair enough, more info than he'd been looking for.

"I imagine you know I'm here about Ms. Bardot?" Malone was suddenly all business.

"Yes." I held my breath and hoped for good news.

"She--" I felt my throat close, and I swallowed hard trying to get control of my emotions.

"Too many injuries?" I finally asked. Whatever her emergency had been, it had seemed to upset her. She'd been shaken, and Kitty was never shaken. I remembered her voice as she'd asked me to take care of Tobey and Minou and get them home. The cats. What would happen to the cats now? "Was she driving too fast?"

"Not exactly." Malone's voice was serious and grim. "We won't know until we have a lot more information from the crime lab. It's too soon to tell, but it may have been a case of road rage. Kitty Bardot was shot."

Sparkle Abbey is the pseudonym of two mystery authors (Mary Lee Woods and Anita Carter). They are friends and neighbors as well as co-writers of the Pampered Pets Mystery Series. The Pen name was created by combining the names of their rescue pets - Sparkle (Mary Lee's cat) and Abbey (Anita's dog). They reside in central Iowa, but if they could write anywhere, you would find them on the beach with their laptops and depending on the time of day, with either an iced tea or a margarita. Visit them at sparkleabbey.com.

Before He Takes (A Mackenzie White Mystery—Book 4)
Blake Pierce