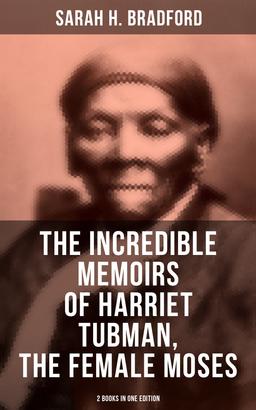 The Incredible Memoirs of Harriet Tubman, the Female Moses (2 Books in One Edition)

Buchbeschreibung zu „The Incredible Memoirs of Harriet Tubman, the Female Moses (2 Books in One Edition)“

As her biographer Sarah H. Bradford mentions, Harriet Tubman is at par with biggest names like Jeanne D'Arc, Grace Darling, and Florence Nightingale in terms of her resilience, courage and do-or-die dedication in liberating her people from the bondages of slavery. Tubman who was herself born into slavery in Maryland in 1822 took over the responsibility of helping and guiding other slaves to freedom after her own escape to Philadelphia in 1849. Traveling by night and in extreme secrecy, Tubman "never lost a passenger". When the Civil War began, Tubman worked for the Union Army, first as a cook and nurse, and then as an armed scout and spy. She was the first woman to lead an armed expedition in the war and to guide the raid at Combahee Ferry, which liberated more than 700 slaves.
Excerpt:
"The whip was in sight on the mantel-piece, as a reminder of what was to be expected if the work was not done well. Harriet fixed the furniture as she was told to do, and swept with all her strength, raising a tremendous dust. The moment she had finished sweeping, she took her dusting cloth, and wiped everything "so you could see your face in 'em, de shone so," in haste to go and set the table for breakfast, and do her other work. The dust which she had set flying only settled down again on chairs, tables, and the piano. "Miss Susan" came in and looked around…." (Scenes in the Life of Harriet Tubman)
Sarah H. Bradford (1818–1912) was an American writer, historian and one of the first American women writers to specialize in children's literature, predating better-known writers such as Louisa May Alcott. Bradford was also a very close friend of Tubman and a contemporary of Harriet Beecher Stowe, the author of Uncle Tom's Cabin.

Ähnliche Bücher wie „The Incredible Memoirs of Harriet Tubman, the Female Moses (2 Books in One Edition)“