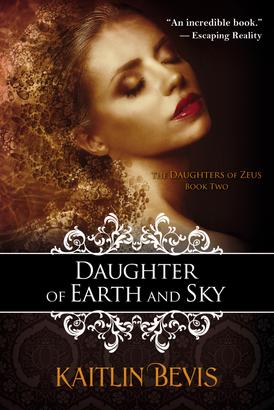 Daughter of Earth and Sky

""Bevis has done a wonderful job building the worlds that the gods occupy as well as giving them a place in the modern world." Amazon Top Reviewer and author, Margaret Lesh

"I stayed up way too late, again! I had to know what happened! You might call me irresponsible, and that may be true. But when a series comes along and grabs you like Daughters of Zeus, it really can't be helped." Amazon Top Reviewer and author, Rachel Wagner

"I need to calm down before I write this review because I am still reeling from the book. OMG! I thought book 1: Persephone was good, but this was WAY BETTER! Lastly, OMG!!! I need book 3 so badly . . ." Amazon Top Reviewer and author, Mary Smith

Some vows can never be broken, especially when you've recently found out you're a goddess.

In the flick of a eyelash Persephone has gone from being a high school junior in Athens, Georgia to the wife of Hades, god of the Underworld. Under his platonic protection, she's waiting for springtime, when Boreas, the sinister god of winter, will stop stalking her.

But even Hades can't keep Boreas and his minions from threatening her. Finally she escapes back to the world of the living. Maybe she can just go back to normal--and forget that she's fallen in love with Hades.

Thanatos--a friend from the Underworld, has betrayed her. Persephone can't tell anyone about Thanatos' betrayal, and it drives a wedge between her and Hades.

And then there's Aphrodite, the gorgeous goddess who was born among the ocean waves with more charm than she can control. Persephone's dearest ally, Melissa, is furious and jealous when Aphrodite starts winning Persephone's friendship. Persephone turns to a human boy for friendship. But will their relationship put him in danger?

Persephone must choose between her human life and her responsibilities as a goddess. If she doesn't, she could lose that life and Hades, too.

But either way, she may not survive her father's schemes. After all, she's Zeus's daughter.

Kaitlin Bevis spent her childhood curled up with a book and a pen. If the ending didn't agree with her, she rewrote it. Because she's always wanted to be a writer, she spent high school and college learning everything she could to achieve that goal. After graduating college with a BFA and Masters in English, Kaitlin went on to write The Daughters of Zeus series. www.kaitlinbevis.com"