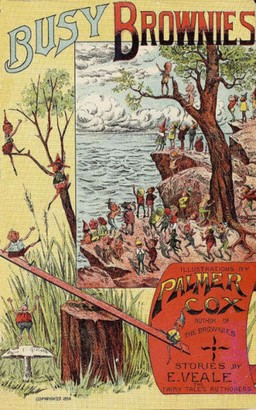 All the Brownies had promised to help, and when a Brownie undertakes a thing he works as busily as a beaver until it is accomplished. Now this is what they determined to do.

Brownies chopping wood
The Fairy Queen's palace had been destroyed—a wind that had swept through the forest carrying trees before it, and spreading ruin as it traveled, had lifted up the Fairy Queen's home and dashed it all to pieces. Poor little Queen; how sorrowful she felt to lose the pretty house where the royal family of Fairyland had so long lived.

Illustration of the paint incident described below
But true to their nature the Brownies came to the rescue, promising to build a palace far more beautiful than the one that was lost. Such helpful little creatures as the Brownies never lived. No chance of doing good to one in trouble ever escapes these generous little fellows and certainly this was a work to be hailed with much joy.

For a long while before they commenced, you could see them gathered in groups, discussing how and where they should begin, and how they could make the palace more beautiful. They were a funny looking set when they started out for the place where the house was to be built. Each one carried something. One little fellow had an axe, another, hammer and nails, one the mortar hod and still another the plane, while the master worker could be seen with the square in his hand giving directions to the whole crowd.

They commenced their work one beautiful moonlight night. Brownies, you know, work when the darkness has put all the world to sleep. What a time they had getting all the things together. Arriving at the spot, some fell to chopping wood, while others mixed the mortar and rigged up the pulleys by which they were to raise the stuff to the roof. How the hammers rang out as they struck the bright little nails.

When We Were Alive
Chelsea Fisher

Farzaneh and the Moon
Matt Wilven