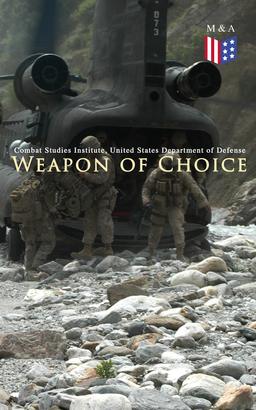 U.S. Army Special Operations Forces in Afghanistan: Awakening the Giant, Toppling the Taliban, The Fist Campaigns, Development of the War

"Weapon of Choice" presents a history of the U.S. Army special operations forces in Afghanistan from 11 September 2001 to 15 May 2002, during America's global war on terrorism. The purpose of the book is not to resolve Army special operations doctrinal issues, to clarify or update military definitions, or to be the "definitive" history of the continuing unconventional war in Afghanistan. The purpose is to demonstrate how the war to drive the Taliban from power, help Afghan people, and assist the Afghan Interim Authority (AIA) rebuild the country afterward was successfully accomplished by majors, captains, warrant officers, and sergeants on tactical teams and aircrews at the lowest levels.
Contents:
Prelude to Terror
Awakening the Giant
"Subdue Without Fighting"
Developing the SOF Campaign
Top Draft Choices
Committed to Middle East Exercises
Civil Affairs to Islamabad, Pakistan
Site Coordination With the Uzbeks at Karshi Kanabad
Uncorking the Bottled Airlift
Toppling the Taliban in Afghanistan, 19 October-7 December 2001
Jumping Into the Dark
Showing American Power
"Look, We Have to Get the Special Forces Teams Into Afghanistan!"
On Horseback With Dostum
A "Bump" and Missiles in the Abyss
500 Afghans Can Die, But Not One American Can Be Injured
Al-Qaeda Uprising—Qala-i-Jangi
The Karzai Way to Kandahar
The Campaign in Transition, 8 December 2001-28 February 2002
Old Glory Flies Again in Kabul
Taking Down al-Qaeda at the Mir Wais Hospital
Politics, War, and Rapport
End of Mission—Aerial Resupply in Afghanistan
The New War
Entering the Valley
D-Day ANACONDA From the Viewpoint of Force Multipliers
"Good Morrrrning, Afghannnnistan"
Driving the Taliban From Power
Transition and Combat Operations

The Life and Work of Jefferson Davis
Frank H. Alfriend