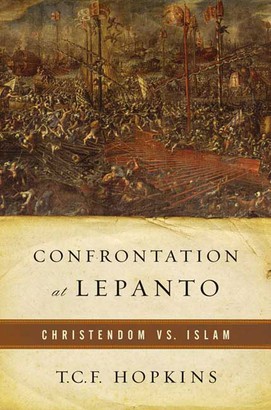 Like an angry lion, the Turkish menace growled at the frontiers of Europe. In 1453, the last remnant of the mighty Roman Empire was obliterated when Turkish forces overran Constantinople. Western civilization was being threatened by medieval Islam. By 1570, a huge Turkish fleet had begun to turn the Mediterranean into a Muslim lake. A year later Pope Pius V created an anti-Ottoman alliance known as the Holy League--Christendom's answer to Jihad.

One morning in October 1571, Don John of Austria, commanding the fleet of the Holy League, met the Ottoman Turks in the waters at the mouth of the Gulf of Patros. The future of a despairing, fragmented Europe was about to be decided....

By four o'clock that afternoon the naval battle had become a mêlée, and the sea had literally turned from blue to red from all the blood shed. When the smoke cleared, the Turkish fleet had been broken.

In sheer numbers of casualties there has never been a more costly naval battle than Lepanto. The Crusaders lost 17 ships and 7,500 men; the Muslims lost more than 200 warships and nearly 20,000 men.

For the first time in more than a century, West had defeated East. The Christians had successfully taken the offensive. Lepanto was one of the greatest turning points in history, though the centuries to come would see many more battles in the continuing conflict between Christianity and Islam.

Confrontation at Lepanto is a fascinating account of that decisive battle on a very human level. Drawing on meticulous research, the author brings to life personalities, tactics, and details, making the narrative as fascinating and compelling as a novel. The result is a book whose lessons resonate today.

Jews in the Ottoman Empire During WWI. How the Germans Saved the Jews
Justin Leopold-Cohen

A History of Giants
Henry Lanier