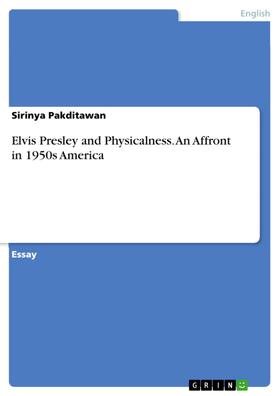 Elvis Presley and Physicalness. An Affront in 1950s America

Essay from the year 2011 in the subject American Studies - Culture and Applied Geography, grade: 1,5, University of Hamburg, language: English, abstract: Next to legends like Chuck Berry, Little Richard, Buddy Holly, Bill Haley and Jerry Lee Lewis, Elvis Presley belongs to the first generation of Rock’n Rollers in the 1950s. They set the standards for Rock’n Roll music in the next decades. Presley entered the stage in 1956 and he was described as “a presence who, because of his simultaneous mastery of recordings, movies, and TV, was destined to have more influence than any Broadway show could ever imagine”.

Elvis Presley can be described as the first hero of Rock’n Roll because he had an unprecedented ability and presence to perform his songs thrillingly. He created a completely genuine dancing style and his career was without comparison from the first day onwards. Presley scored Nr. 1 in the charts with his song “Heartbreak Hotel” in 1956. Hence, he also set new standards and led on the revolution of the young against the old, thereby challenging traditions.

In the following, we will deal with the topic of Elvis Presley and his physicalness which was regarded as an affront in 1950s America. Presley can be regarded as the King of Rock’n Roll because he revolutionized (white) music by connecting it with physical and sexual expression.

The Soul of Rock 'N Roll: A History of African Americans in Rock Music
Jeffrey Othello