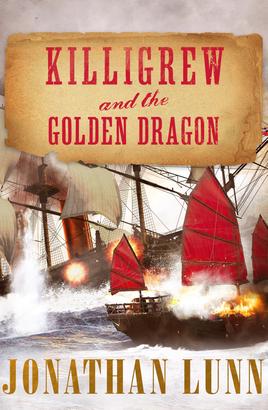 Killigrew and the Golden Dragon

Piracy, bloodshed and betrayal in the early days of Hong Kong…

1849, South China Sea: A burning clipper and her slaughtered crew can only be the work of Zhai Jing-mu, China’s most feared and ruthless pirate. Kit Killigrew, HMS Tisiphone’s second lieutenant, captures Zhai after a bloody chase.

After handing Zhai to the police, Killigrew is free to enjoy the many pleasures of Hong Kong. But beneath the opulent surface, tensions seethe: the Triads are gaining influence and the hostilities behind the Opium War are all too easily revived. Then Zhai escapes…

Soon Killigrew finds treachery and murder around every corner. And somewhere in this tangled web lurks Blase Bannatyne, wealthy tai-pan of the leading company importing opium into China.

The game is afoot!

The second in a stunning series featuring naval hero Kit Killigrew, Jonathan Lunn’s Killigrew and the Golden Dragon is alive with the sights, sounds and smells of naval adventure. Perfect for fans of Iain Gale, Philip McCutchan and Bernard Cornwell.

Praise for the Killigrew Novels

‘A hero to rival any Horatio Hornblower. Swashbuckling? You bet’ Belfast Telegraph

‘If you revel in the Hornblower and the Sharpe books, grab a copy of Jonathan Lunn’ Bolton Evening News