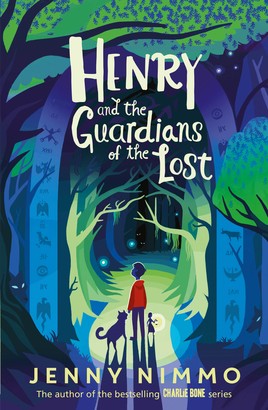 Henry and the Guardians of the Lost

Buchbeschreibung zu „Henry and the Guardians of the Lost“

A spell-binding new children's book from one of Britain’s best-loved authors of fantasy adventure. Perfect for fans of Eva Ibbotson, Inkheart, and the Charlie Bone series.

The yellow letter arrived on a Saturday, otherwise Henry would have been at school. The envelope was such a bright, sunny colour, no one would have believed that it contained a bombshell.

Less than 10 minutes after the arrival of the mysterious letter, Henry is on the run with his Auntie Pearl, possibly never to return home. Henry has a secret. He is twelve, but he hasn’t aged a day since the moment he was thrust a hundred years into the future. Now his secret has put him in danger. His only hope is the protection of the Guardians of the Lost.

A wonderfully immersive fantasy book for children aged 9 years and up.

'A fast moving, dialogue-driven romp with plenty of cliff-hangers for those first hooked into reading by Harry Potter’ – The Bookseller on Midnight for Charlie Bone

Another gripping magical adventure from the Charlie Bone universe.

Have you collected all of the Charlie Bone stories?

Charlie Bone and the Time Twister

Charlie Bone and the Blue Boa

Charlie Bone and the Castle of Mirrors

Charlie Bone and the Hidden King

Charlie Bone and the Wilderness Wolf

Charlie Bone and the Shadow of Badlock

Charlie Bone and the Red Knight

Also look out for The Snow Spider trilogy.

‘A fast moving, dialogue driven romp with plenty of cliff-hangers for those first hooked into reading by Harry Potter’ – Bookseller on Midnight for Charlie Bone

Jenny Nimmo is the acclaimed author of the Charlie Bone books for children. She has won several significant awards for her children’s books, including the Nestle Smarties Book Prize and the Tir na n-Og Welsh Arts Council award for The Snow Spider. She lives in Wales with her husband, David.

Jenny Nimmo was born in Berkshire, but has lived in a converted watermill in Wales for the past thirty four years. Her husband is a painter and printmaker and they have three children and three grandchildren. She has worked in the theatre, in television and as a governess in Italy.

For as long as she can remember, Jenny has loved books. She was six when she went to boarding school and reading was a wonderful escape, it allowed her to believe that she was somewhere else. She begn to write her own stories when she was ten. She cannot help using magic in her work because myths legends and fairy-tales were her favourite reading as a child, and they have remained at the back of her mind ever since.

In 1986 her book ‘The Snow Spider’ won the Smarties Grand Prix and, in 1987, was awarded the Tir na n’Og by the Welsh Arts Council. ‘The Rinaldi Ring’ was chosen as Guardian Book of the Week, and was shortlisted for the Carnegie medal, for which she received a commendation.Five of Jenny’s eight books about Charlie Bone in ‘The Children of the Red King’ series were on the New York Times bestseller list, and she has now completed ‘The Secret Kingdom Trilogy’ a prequel to the Charlie Bone Books..

Ähnliche Bücher wie „Henry and the Guardians of the Lost“

When Did You See Her Last?
Lemony Snicket

When Did You See Her Last?
Lemony Snicket

Why Is This Night Different from All Other Nights?
Lemony Snicket