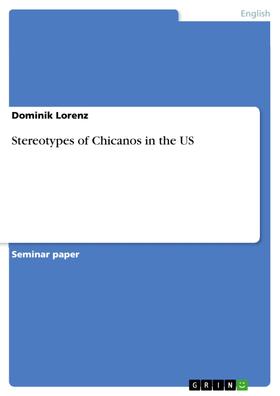 Stereotypes of Chicanos in the US

Beschreibung zu „Stereotypes of Chicanos in the US“

Seminar paper from the year 2008 in the subject English Language and Literature Studies - Culture and Applied Geography, grade: 1,7, University of Freiburg, course: Mexicans in the US, 29 entries in the bibliography, language: English, abstract: In this term paper, negative stereotypes of Mexicans and Chicanos in the U.S. media will be examined. These stereotypes include violent, criminal and vile behavior while wearing a wide-brimmed sombrero with a bottle of tequila in hand. Why do they exist? What are the reasons for this? Berg argues that one prominent source for the dominant stereotype of Chicanos is the media, primarily the globally dominant U.S. media, and specifically – though not exclusively – Hollywood movies. According to the psychologist Yueh-Ting Lee, “stereotypes are probabilistic belief [which we] use to categorize people, objects, and events and we have to have them in order to deal with all the information in a world with which we are often uncertain as well as unfamiliar.” A dangerous character is ascribed to stereotypes when we consider Bower’s statement that stereotyping can be seen as a “breeding soil for errant generalizations about others that easily [merge] into racism, sexism, and other forms of bigotry.” Since a complete presentation of the existing stereotypes would stretch the point, I will focus on the most popular stereotypes ascribed to Chicanos. Furthermore, the origin of these negative stereotypes towards this minority will be analysed. In order to explore this, I will place emphasis on stereotypes in American news, movies and in advertisement. Last but not least, I will talk about multicultural picture books and stereotypes therein. In the first part of this term paper, I will talk about blurred coverage in American news. Syque states that in creating stereotypes “we often mistakenly assume things are correlated when they are not; when we make this mistake, we will find ways to ‘prove’ it or simply believe and assert the correlation.” This is called illusory correlation. The problem of this psychological phenomenon will be connected with partial coverage, which can cause stereotypes. In the second part, the presence of Chicanos and their language in American movies will be scrutinized. Thereby, the phenomenon of the so-called ‘Mock Spanish’, which describes a variety of usages common in some otherwise monolingual Anglo-American circles, will psychologically be clarified using the social identity theory. Stereotypes in advertisement are discussed in the third section. A reference to the Mexican bandit stereotype will be shown by the ‘Frito Bandito’ which was the name of an advertising campaign in the seventies. In the final section, negative stereotypes in one of the most famous American picture books will be analyzed. Bunting’s “A day’s work” will serve as a prime example of pitfalls, which come up when confronting young children with such stereotypes. The result is an implicit stereotyping.

Ähnliche Titel wie „Stereotypes of Chicanos in the US“

From American History to Hollywood Screening. Black Stereotypes in Griffith's "The Birth of a Nation"
Alina Müller

"The Game the Same. Just Got More Fierce."
Eike Rüdebusch

Stereotypes in Internet Memes. A Linguistic Analysis
I. Magel