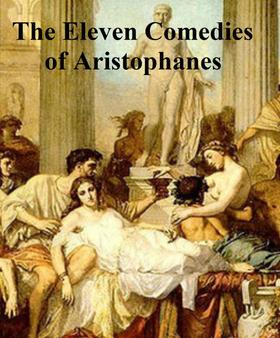 The Eleven Comedies of Aristophanes

All 11 comedies, literally translated. Two volumes in one file. Includes: Knights, Acharnians, Peace, Lysistrata, The Clouds, The Wasps, The Birds, The Frogs, The Thesmophoriazusae, The Ecclesiazusae, and Plutus. According to Wikipedia: "Aristophanes (ca. 446 BCE – ca. 386 BCE), son of Philippus, of the deme Cydathenaus, was a prolific and much acclaimed, comic playwright of ancient Athens. Eleven of his forty plays have come down to us virtually complete. These, as well as fragments of some of his other plays, provide us with the only real example we have of a genre of comic drama known as Old Comedy and they are in fact used to define the genre. Also known as the Father of Comedy and the Prince of Ancient Comedy, Aristophanes has been said to recreate the life of ancient Athens more convincingly than any other author. His powers of ridicule were feared and acknowledged by influential contemporaries - although more than one contemporary, satirical playwright caricatured the philosopher Socrates, his student Plato singled out Aristophanes' play The Clouds as slander contributing to his old mentor's trial and execution."