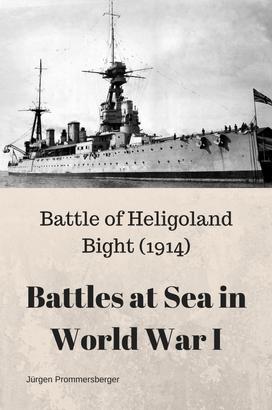 Battles at Sea in World War I

Beschreibung zu „Battles at Sea in World War I“

The First Battle of Heligoland Bight was the first naval battle of the First World War, fought on 28 August 1914, between the United Kingdom and Germany. The battle took place in the south-eastern North Sea when the British attacked German patrols off the north-west German coast. The German High Seas Fleet remained largely in safe harbours on the north German coast while the British Grand Fleet remained in the northern North Sea. Both sides engaged in long-distance sorties with cruisers and battlecruisers, and close reconnaissance of the area of sea near the German coast—the Heligoland Bight—by destroyer. The British devised a plan to ambush German destroyers on their daily patrols. A British fleet of 31 destroyers and two cruisers under Commodore Reginald Tyrwhitt and submarines commanded by Commodore Roger Keyes was dispatched. They were supported at longer range by an additional six light cruisers commanded by William Goodenough, and five battlecruisers commanded by Vice Admiral David Beatty. Three German light cruisers and one destroyer were sunk. Three more light cruisers were damaged, 712 sailors killed, 530 injured and 336 taken prisoner. The British suffered one light cruiser and three destroyers damaged, 35 killed and 40 wounded. The battle was regarded as a great victory in Britain, where the returning ships were met by cheering crowds. Publicly, Vice Admiral Beatty was regarded as a hero, although he had taken little part in the action or planning of the raid, which was led by Commodore Tyrwhitt and conceived by himself and Keyes, who had persuaded the Admiralty to adopt it. However, the raid might have led to disaster had the additional forces under Beatty not been sent by Admiral John Jellicoe at the last minute. The effect upon the German government and in particular the Kaiser was to restrict the freedom of action of the German fleet, instructing it to remain in port and avoid any contact with superior forces for several months thereafter.

Ähnliche Titel wie „Battles at Sea in World War I“

The Harwich Naval Forces: Their Part in the Great War
E. F. Knight