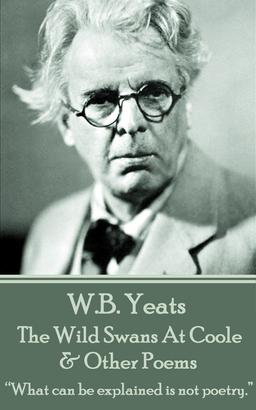 The Wild Swans At Coole & Other Poems

“What can be explained is not poetry.”

Beschreibung zu „The Wild Swans At Coole & Other Poems“

William Butler Yeats (1865 – 1939) is best described as Ireland’s national poet in addition to being one of the major twentieth-century literary figures of the English tongue. To many literary critics, Yeats represents the ‘Romantic poet of modernism,’ which is quite revealing about his extraordinary style that combines between the outward emphasis on the expression of emotions and the extensive use of symbolism, imagery and allusions. Yeats also wrote prose and drama and established himself as the spokesman of the Irish cause. His fame was greatly boosted mainly after he received the Nobel Prize in Literature in 1923. His life was marked by his many love stories, by his great interest in oriental mysticism and occultism as well as by political engagement since he served as an Irish senator for two terms. Today, although William Butler Yeats’s contribution to literary modernism and to Irish nationalism remains incontestable. Here we publish a collection of his poems that show just why his works are held in such esteem including The Wild Swans At Coole that many regard as his finest achievement.

Ähnliche Titel wie „The Wild Swans At Coole & Other Poems“

In The Seven Woods & On Baile's Strand
William Butler Yeats