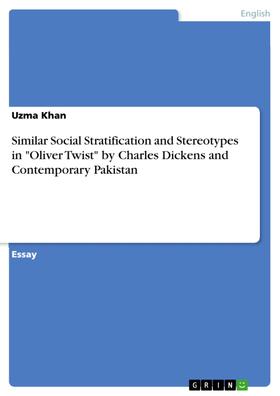 Essay from the year 2015 in the subject English Language and Literature Studies - Literature, , course: ENGL 499, language: English, abstract: This paper presents the subject of the class system in Charles Dickens' novel "Oliver Twist" as compared to the social stratification in Pakistan today.

The investigation centers on the settings and symbolism in the novel which uncovers the social stratification during the Victorian age and traces the commonalities of class society between the Victorians and contemporary Pakistani society.

The stereotypes in the Victorian British society depicted by Dickens in Oliver Twist are similar to the stereotypes upheld in modern day Pakistan.
Class differences in Pakistan imply certain notions which are comparable to that of the Victorian society portrayed in the novel.

The paper accentuates the theoretical framework of the Marxist approach being applied on the primary text to underline the unquestionable proposition of colonialism of the British Empire and class divisions as an outcome of this process.

Based on the critical textual analysis of the novel, I will assess the applicability of Marxist idea of class stratification and my goal is to trace the commonalities in the social stratification and stereotypes of contemporary Pakistan and Victorian Britain.

The Concept of Racism, Stereotypes and Prejudices Reflected in En Vogue’s "Free Your Mind"
Sarah Wunderlich