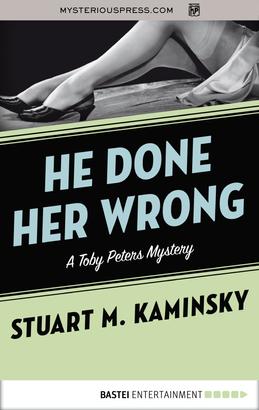 He Done Her Wrong

Beschreibung zu „He Done Her Wrong“

As a favor to his brother, Toby Peters does a job for a fading Hollywood diva.

You can't trust a man who's dressed as Mae West, especially not in Mae West's house. One of Hollywood's earliest sex symbols, the whip-smart blonde's star has fallen since the Hays Code cracked down on the racy repartee that made her famous. Her latest project is a thinly veiled autobiographical novel, whose only copy is stolen just after she finishes her first draft.

Tonight she's having a Mae West party, with every guest a man dressed as her. The thief is among those in drag, and Toby Peters has come to tear off his wig. He's there as a favor to his brother, a brutal cop who had a fling with West when she first moved to Hollywood. But this is more than a theft. The crook wants to destroy Mae West, and he has murder on his mind.

Stuart M. Kaminsky (1934-2009) was one of the most prolific crime fiction authors of the last four decades. Born in Chicago, he spent his youth immersed in pulp fiction and classic cinema - two forms of popular entertainment which he would make his life's work. After college and a stint in the army, Kaminsky wrote film criticism and biographies of the great actors and directors of Hollywood's Golden Age. In 1977, when a planned biography of Charlton Heston fell through, Kaminsky wrote Bullet for a Star, his first Toby Peters novel, beginning a fiction career that would last the rest of his life.

Kaminsky penned twenty-four novels starring the detective, whom he described as "the anti-Philip Marlowe." In 1981's Death of a Dissident, Kaminsky debuted Moscow police detective Porfiry Rostnikov, whose stories were praised for their accurate depiction of Soviet life. His other two series starred Abe Lieberman, a hardened Chicago cop, and Lew Fonseca, a process server. In all, Kaminsky wrote more than sixty novels. He died in St. Louis in 2009.

"Impressive. . . . Kaminsky has staked a claim to a piece of the Russian turf. . . . He captures the Russian scene and characters in rich detail." - The Washington Post Book World.

"Quite simply the best cop to come out of the Soviet Union since Martin Cruz Smith's Arkady Renko in Gorky Park." - The San Francisco Examiner.

"Stuart Kaminsky's Rostnikov novels are among the best mysteries being written." - The San Diego Union-Tribune.

"For anyone with a taste for old Hollywood B-movie mysteries, Edgar winner Kaminsky offers plenty of nostalgic fun . . . The tone is light, the pace brisk, the tongue firmly in cheek." - Publishers Weekly.

Down for the Count
Stuart M. Kaminsky