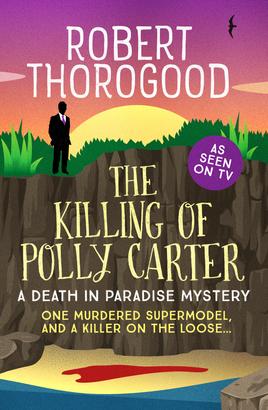 The Killing of Polly Carter

DI Poole must solve the killing of a supermodel in the second Death in Paradise Mystery.

When Polly Carter is found dead at the foot of a cliff, it looks like suicide, but DI Richard Poole is not convinced. Famous for her looks and wild party-girl lifestyle, her friends are adamant she would never have killed herself.
Seconded from London to the Caribbean island of Saint Marie, DI Poole is already at his wit’s end with the blinding heat. Unpicking the conflicting motives of a number of suspects and their stream of alibis is infuriating enough; a visit from his mother is the cherry on the cake.
An absolutely gripping crime thriller, The Killing of Polly Carter is perfect for fans of Midsomer Murders and Agatha Christie.

‘Very funny and dark with great pace. I love Robert Thorogood’s writing’ Peter James
‘This second Death in Paradise novel is a gem’ Daily Express
‘This brilliantly crafted, hugely enjoyable and suitably goosbump-inducing novel is an utter delight from start to finish’ Heat

Robert Thorogood is the creator of the hit BBC One TV series Death in Paradise.

After graduating from Cambridge University, he spent many years supporting his writing career with a variety of temporary jobs, including dressing up in a full bear costume to taunt the then Prime Minister, John Major; being a magician at Hamley’s; and being employed to change the batteries in the remote controls for a minor branch of the Saudi Royal Family.

He’s been an avid fan of murder mysteries since he read his first Agatha Christie novel, Peril at End House, at the age of ten. So far, he has written three Death in Paradise mystery novels, with a fourth due out later this year.

The Art of Deception
Elizabeth Ironside

In the Heat of the Night
John Ball