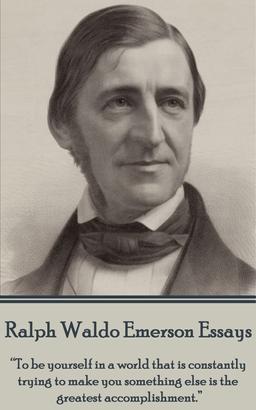 “To be yourself in a world that is constantly trying to make you something else is the greatest accomplishment.”

Ralph Waldo Emerson was born in Boston, Massachusetts, on May 25, 1803. Although most widely known as an outstanding poet he was also an essayist and lecturer. A leader of the Transcendentalist poetry movement his works are amongst the finest written in the 19th Century. Many of his essays were written firstly to be delivered as lecturers before becoming honed and published as essays. His essay entitled ‘The American Scholar’ was put forward by Oliver Wendell Holmes Sr as America’s Intellectual Declaration of Independence. Emerson was called the Concord Sage and became a leading voice of intellectual culture in the United States. Such was his influence in the field that James Russell Lowell, editor of the Atlantic Monthly and the North American Review, said that Emerson was the “most steadily attractive lecturer in America,” and “one of the pioneers of the lecturing system.” Here we publish a collection of his essays which bring his view and thoughts across a range of subjects sharply into view.

The House of the Seven Gables (Gothic Classic) - Illustrated Unabridged Edition: Historical Novel about Salem Witch Trials from the Renowned American Author of "The Scarlet Letter" and "Twice-Told Tales" with Biography
Nathaniel Hawthorne

The God in You (Unabridged)
Prentice Mulford