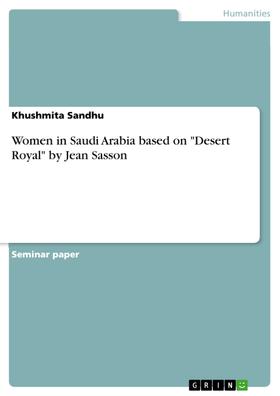 Women in Saudi Arabia based on "Desert Royal" by Jean Sasson

Seminar paper from the year 2014 in the subject Sociology - Culture, Technology, Peoples / Nations, grade: 10, , course: BA Dual Hons Social Sciences, language: English, abstract: The present term paper will try to compile the life and atrocities suffered by Saudi women, royals and commoners - the patriarchal society of Saudi Arabia, as well as the recent developments in Saudi Arabia with regard to women, both by taking references from the novels written by Jean Sasson as well as from the web sources.
Princess - A trilogy, which is written by international author Jean Sasson, is a heart stirring novel about the life of a Saudi Princess Sultana, which is testimony to a woman of indomitable spirit and great courage.
In this trilogy, Jean Sasson captured the flavours and reality of life in a country full of extremes and contradictions. Princess ‘Sultana’, a real Saudi princess closely related to king, lives those contradictions, with priceless jewels, many servants, unlimited funds at her disposal, but NO FREEDOM. Jean Sasson quotes princess ‘Sultana’ as, “A prisoner in a gilded cage with no vote, no control, and no value but as a mother of son, she is totally at mercy of the men of her life- her father, her brother, her husband’. In this novel, this bold Saudi princess gave an unvarnished look inside a closed society. ‘Sultana’ lifted the veil on the shocking world of forced marriages, sex slavery, honour killings and other outrages against women, both royal and common.
By telling her story and miserable life of women in kingdom, ‘Sultana’ risked the wrath of the Saudi people and for this reason, she told her story anonymously through the bestselling author.
This never forgetting real life story inspired me to write a term paper regarding society of Saudi Arabia, whose shimmers fade, when it comes to life of women