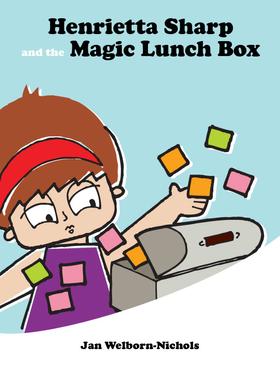 Twelve-year-old Henrietta Sharp is smart, funny and likes to read the dictionary. But all she really wants is to be normal, a normal size that is, like her fashion-minded best friend Taffeta Bloom. That’s life before a magic lunch box (LB) mysteriously appears and tells Henri that she is a Traveler, someone who can summon portals and travel the universe.

Before you can say brand new super-power, Henri, her brainy boy-cousin P.J., Taffeta, and LB, are off on an adventure. They must find the medallion of power that will awaken the guide who will train Henri in the ways of a Traveler. Unfortunately, this particular guide is the most unlikely individual ever to assume responsibility for under age children and Henri’s training is strictly on the job.

They must leave immediately for the domain of Grymvald to rescue the imprisoned leader of the Fake Food Rebellion. A rogue Traveler, now a powerful Star Lord, has enslaved much of Grymvald with a deadly, addictive substance. Now, he gathers his forces in preparation for an attack on Earth.

The friends find Grymvald a different and disturbing and kind of place. It looks a lot like Earth, except that inanimate objects are, well, animated. Vegetables talk and think, dinnerware can be lethal, and saying no to seconds can get you put in prison.

Without the least idea how, Henri must learn to wield the medallion and defeat the Star Lord, while resisting the lure of its infinite power. With LB, Taffy and P.J. by her side, Henri discovers that friendship and loyalty have a power of their very own, and that the impossible business of saving the world cannot be separated from the complex business of finding herself.

The Girl Who Ruled Fairyland--For a Little While
Catherynne M. Valente