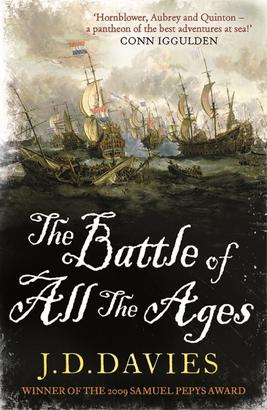 The Battle of All The Ages

Beschreibung zu „The Battle of All The Ages“

Who do you turn to when there’s no one left to trust? Epic sea battles and treasonous betrayals…

In the heat of a gigantic battle against the Dutch, the English fleet is mysteriously divided. A large portion of their resources is sent to meet a French threat which never materialises. Thousands are slaughtered. Could there be a traitor in the Royal Navy?

As popular fury erupts, Captain Matthew Quinton is given the unenviable task of uncovering the enemy within. Heads must roll. Sent to find source of this false intelligence in pirate-infested Plymouth, Quinton is dismayed when all evidence seems to point to an old friend…

Fans of Patrick O'Brian's Master and Commander will love the fifth instalment of the Matthew Quinton Journals.

1. Gentleman Captain
2. The Mountain of Gold
3. The Blast that Tears the Skies
4. The Lion of Midnight
5. The Battle of the Ages
6. The Rage of Fortune
7. Death's Bright Angel
8. The Devil Upon the Wave

The Devil Upon the Wave
J. D. Davies

The Blast that Tears the Skies
J. D. Davies

Ähnliche Titel wie „The Battle of All The Ages“