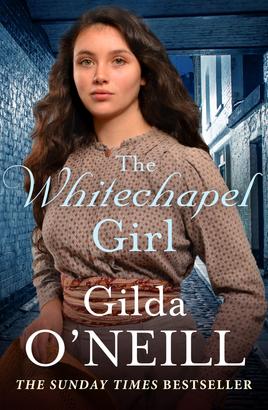 Ettie Wilkins has to get out of Whitechapel. As her mother sinks deeper into alcoholism, the volatile lodger sharing their slum turns his attentions to Ettie.

So when debonair Professor Jacob Protsky picks Ettie out of the crowd, she is determined to seize her chance. Despite a chorus of warnings, Ettie goes to live with Protsky in Bow to assist him with his magic tricks.

But when Ettie befriends the mysterious Celia Tressing, she soon finds herself increasingly worried by events in Whitechapel. A series of gruesome murders and whispers of Jack the Ripper have shaken even that resilient community…

This is an enthralling Victorian drama of sin and redemption, perfect for fans of Rosie Goodwin and Kitty Neale.

Gilda O'Neill was born and brought up in the East End. She left school at fifteen but returned to education as a mature student and settled to live in East London with her husband and family. She authored the highly-acclaimed Sunday Times bestsellers My East End and Our Street, as well as many novels. Gilda passed away on 24 September 2010, after a short illness.

The Quincunx: The Maliphants
Charles Palliser

The Quincunx: The Palphramonds
Charles Palliser

The Quincunx: The Clothiers
Charles Palliser

The Quincunx: The Huffams
Charles Palliser

Unterrichtsstunde: Pakistani or British? A film study of „East is East“
Sebastian Goetzke

The Illusion of Murder
Carol McCleary