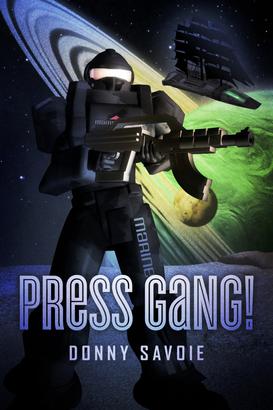 During the 17th century The Royal Navy used military impressment as a means of taking men into service by force. Millennia later, the concept lives on in the Royal Terran Empire when the frigate HMSS Rubicon sends her impressment team, known as the “press gang” down to the planet New Dublin in order to feed her insatiable appetite for space fodder. The Captain’s word is law and his judgement is final. The punishment for a minor offence is a ship’s flogging. For serious crimes there is only one sentence---death! An impressed man has to be tough and a fast learner in the brutal environment of an interstellar warship. Killian Connacher is such a man. Wrenched brutally from his family and home world, he is immediately plunged into the turmoil of Marine training, interstellar intrigue, and space warfare as HMSS Rubicon sails through space on the galactic winds and waves of dark energy. Along his journey from civilian to hardened Marine, Killian has time to play a little football in battle armour, rescue his captain and a beautiful princess, and learn the hard lessons about life, death, friendship, love, duty, loss, and pain.

The Killing of Worlds
Scott Westerfeld