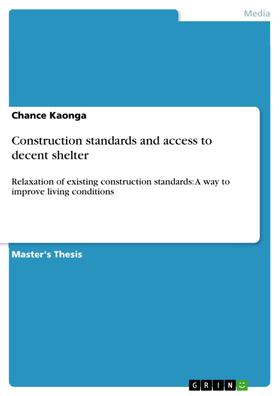 Master's Thesis from the year 2012 in the subject Art - Architecture / History of Construction, grade: A+, Leuven Catholic University, language: English, abstract: This research examines the standards of construction and regulations in Zambia, in light of their effect on the attainment of the acclaimed international rights to adequate shelter for all and development of sustainable human settlements in an urbanising world (UNCHS, 2003).

As argued by Rafael Tuts (1996), that the prohibitively high building and planning standards are often considered as one of the main obstacles to the provision of low-cost housing in developing countries. He further stated that the more and more agencies and stakeholders advocate the relaxation of these standards; the major motivation is the anticipated initial cost reduction .

The statutes governing the development of infrastructure have a genesis from the British system and fundamentals; Zambia was a British colony until 1964. The principal law governing the development control is Chapter 283 of the Laws of Zambia; The Town and Country Planning Act.
As the population of the country grows, the number and size of squatter settlements correspondingly increase. Most of the houses in the squatter settlements are built using construction materials and methods that are not recognised by the statutes. These settlements lack basic infrastructure services such as generous access roads, piped water, sanitation and electricity. The plot lay-outs are usually irregular and of unsecure tenure.
The focus will be on examining the low and medium cost housing schemes implemented thus far and access to such housing over the years. The intervention of some civil society organisations to help provide affordable and decent shelter to the poor and disadvantaged people shall also be delved into. The methods of house production shall be evaluated to determine their performance and appropriateness and adequacy.
Focus shall also be on the construction methodologies and materials used in squatter settlements that have been in existence for over 30 years. The performance of such houses shall be evaluated to determine their suitability and affordability.

An attempt to evaluate the use of local materials in vernacular /traditional setting shall be done with a view of determining their performance and durability.
The study closes by looking at the land administration of the country and access to the basic infrastructure and social service as they impact on the quest for adequate shelter for all.