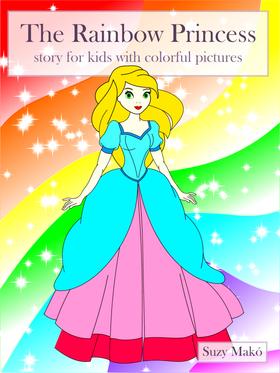 story for kids with colorful pictures

Amelia is just a regular girl, living in her cottage on the margins of the forest. One day something magical will happen, that would change her life. Amelia will see a rainbow, which leads to another world – the rainbow kingdom, full of unusual creatures. The scary which will give to Amelia a little bottle with a magic potion, thanks to which Amelia would change into a beautiful rainbow butterfly and could enter the rainbow kingdom. The rainbow kingdom is a huge adventure for her. The girl will fall in love with the king of the rainbow kingdom, and the spell from the witch could not be turned back again. Amelia would, therefore, turn into a creature who can live in the rainbow kingdom but can not return to the Earth. What adventures would Amelia have in the rainbow kingdom? What creatures would she meet on her adventurous journey? Would she be able to break the spell and live with the rainbow king, who loves her so much?
This is a story full of illustrated drawings that your kid will love. Read the story a good night to your kid, support their imagination thanks to the colorful picture. The story is suitable for all age categories. Read this illustrated story to your kids in the morning, before sleeping or anytime when your little treasure is up to hear a beautiful story.

The Princess from the Sky
Suzy Makó

Beany McGee and Rheinhart the Rhinoceros: Why Rhinos Are Blue
Park Borchert

Every Hero Has a Story
Mark Binder

I Wish All Your Wishes and Mine
Vaeta Zitman

Your Feet Are Getting Sleepy
Kelli McNeil