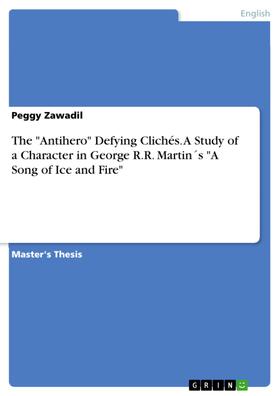 The "Antihero" Defying Clichés. A Study of a Character in George R.R. Martin´s "A Song of Ice and Fire"

Beschreibung zu „The "Antihero" Defying Clichés. A Study of a Character in George R.R. Martin´s "A Song of Ice and Fire"“

Master's Thesis from the year 2014 in the subject American Studies - Literature, grade: 2,1, University of Potsdam, language: English, abstract: “Winter is coming” - a phrase not only fervent readers of Fantasy know but also thousands of people throughout the world. The success of the book series A Song of Ice and Fire from George R.R. Martin transcends the literary cosmos as it has long been picturized in the form of an HBO series; hundreds of fan articles are produced each year. Not unlike the roaring popularity of the Harry Potter series a few years ago, the fictional worlds of Westeros and Essos in this Fantasy saga have captured the attention of the masses. [...]
The reader dives into the lives and struggles of the characters, feeling and fighting with them and sometimes even crying when they unexpectedly die (as can be seen in the uproar and comments on various blogs on internet communities when Eddard Stark was unexpectedly executed). Every reader of A Song of Ice and Fire has his or her own favorite characters. In the first novel it was no doubt the nobel and honorable Lord Eddard Stark for most of the literary community - the obvious hero of the masses. But since his shocking demise the preferences of the readers seem to have changed and found a new darling - Tyrion Lannister. As the most discussed and controversial of all characters nobody seems to fully comprehend him: dwarf, egoist, drunkard, nymphomaniac, nerd - the list is long and might be longer still. The only thing all readers, blog-writers and fans seem to agree on is that he is the true hero of the series. But can a hero be an egotistical, sex maniac dwarf?

Ähnliche Titel wie „The "Antihero" Defying Clichés. A Study of a Character in George R.R. Martin´s "A Song of Ice and Fire"“

How does having a Russian mother tongue and living in Hungary influence learning English?
Enikő Jakus