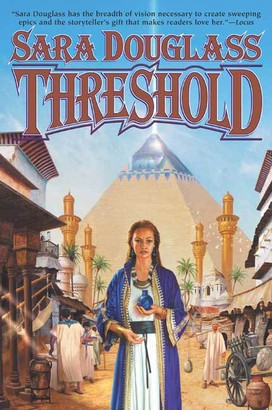 Following the success of The Wayfarer Redemption series, Sara Douglass brings us a beautifully crafted stand-alone novel in Threshold

Over the hot southern land of Ashdod looms the shadow of Threshold, a massive pyramid which the Magi of Ashdod are building to propel themselves into Infinity, a plane of existence that holds the promise of technological magics and supposedly unimaginable power. For decades, thousands of slaves have lost their lives in the construction of this edifice. Now that this construction is almost complete, the Magi need only to add the finishing touches, and they will let nothing stand in the way of achieving their desire.

The Master of the Magi, a young and ambitious man, ready to do anything for power, sees the glassworker slave Tirzah as a plaything, a trifle to relieve the tensions of the day. He senses that under her placid façade Tirzah is hiding something, but try as he may to see beneath her surface, she remains an enigma.

What he does not know is that her secret is the knowledge of forbidden magic. That she senses the inherent power in glass and can communicate with it-and that the glass in Threshold screams to her in pain.

For it knows what neither Tirzah nor any of the Magi suspect. That something waits in Infinity, watching, biding its time, and when the final glass plate is laid and the capstone cemented in blood, it plans to use Threshold to step from Infinity into Ashdod...

Sara Douglass was born in Penola, a small farming settlement in the south of Australia, in 1957. She spent her early years chasing (and being chased by) sheep and collecting snakes before her parents transported her to the city of Adelaiden and the more genteel surroundings of Methodist Ladies College. Having graduated, Sara then became a nurse on her parents' urging (it was both feminine and genteel) and spent seventeen years planning and then effecting her escape.

That escape came in the form of a Ph.D. in early modern English history. Sara and nursing finally parted company after a lengthy time of bare tolerance, and she took up a position as senior lecturer in medieval European history at the Bendigo campus of the Victorian University of La Trobe. Finding the departmental politics of academic life as intolerable as the emotional rigors of nursing, Sara needed to find another escape.

This took the form of one of Sara's childhood loves - books and writing. After she spent some years practicing writing novels, HarperCollins Australia picked up one of Sara's novels, BattleAxe (published in North America as The Wayfarer Redemption), the first in the Tencendor series, and chose it as the lead book in their new fantasy line with immediate success. Since 1995 Sara has become Australia's leading fantasy author and one of its top novelists. Her books are now sold around the world.

Come Back to the Sea
Jason Vanhee

Seekers of the Chalice
Brian Cullen

In the Sight of Akresa
Ray Wood