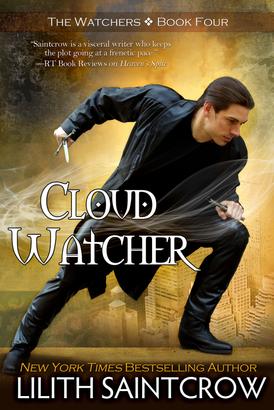 Anya Harris's unwanted talents have made her a refugee, flying from city to city ahead of a tide of burning terror nobody else can see. She's hoping Santiago City will be different, but deep in her heart of hearts, she knows nowhere is safe enough for someone with her secrets. When the gray-eyed man with guns and a sword shows up, claiming to be sent to protect her, Anya has to believe him. After all, she has nowhere else to go.

Jack Gray is one of the oldest Watchers around, scarred by the battle between Circle Lightfall and the Crusade. He's found his witch, and nothing is going to get in the way of protecting her. But being a Watcher is never as simple as it looks. Anya's talent makes her worth millions, if she's delivered alive to the right corporate bidders. Jack's the only one who can save her. But when she finds out who he really is, he might lose her for good . . .

Bounced around the world as a military brat, Lilith Saintcrow fell in love with writing in second grade and never looked back. She currently resides in Vancouver, Washington, with two children, a menagerie, and books. Find her on the web at lilithsaintcrow.com.