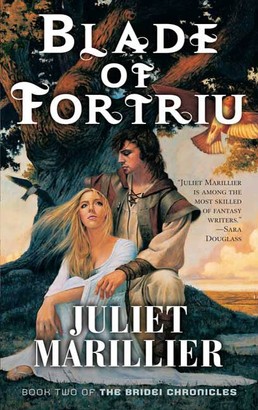 Book Two of The Bridei Chronicles

Blade of Fortriu is the second book in Juliet Marillier's Bridei Chronicles.

Five Winters have passed since young king Bridei ascended the throne of Fortriu. Five years, in which the people have felt a contentment unknown for generations.

But the security of a people can vanish in a heartbeat, for wolves are often drawn to fields filled with fattened sheep. Bridei is determined to drive the Gaelic invaders from his lands once and for all. And so, with his land secure and his house in order, he prepares for war.

And one of Bridei's plans to win the war to come involves the beautiful young Ana. A princess of the Light Isles, she has dwelt as a hostage at the court of Fortriu for most of her young life. Despite being a pawn of fortune, she has bewitched all at court and is dearly loved by Bridei and his queen. But Ana understands her duty. And so she will travel north, to make a strategic marriage with a chieftain she has never seen, in the hopes of gaining an ally on whom Bridei's victory relies.

For secrecy's sake, Ana must travel at a soldier's pace, with a small band led by the enigmatic spymaster Faolan. Bridei implores Ana to trust see the good in Faolan…but Ana cannot see beyond his cold competence and killer's eyes.

Then, when she arrives at the chieftain Alpin's stronghold in the mysterious Briar Woods, her discomfort and unease increase tenfold, for this is a place of full of secrets and her betrothed is an enigma himself. The more Ana tries to uncover the truth of her new life, the more she discovers a maze of polite diversions that mask deadly lies. She fears Faolan, but he may prove to be the truest thing in her world.

JULIET MARILLIER achieved international recognition with the publication of the first two award-winning novels in the Sevenwaters Trilogy, a historical fantasy set in Ireland and Britain in the ninth century, and loosely based on the fairy tale “The Six Swans”. Her other historical fantasy series include the Viking-inspired Light Isles duology and the Bridei Chronicles set in north Britain in the time of the Picts.

The Well of Shades
Juliet Marillier

The Quest for the Trilogy
Mel Odom