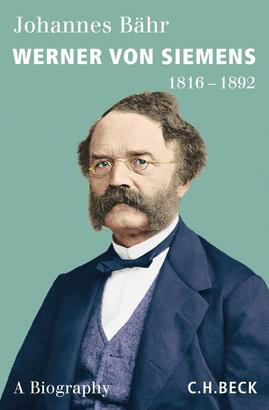 Werner von Siemens counts as one of the pioneers of modernity and was one of the most important entrepreneurs in German history. He contributed to transforming people's everyday lives with fundamental innovations in the field of communications and energy technology. With his brothers, he laid the foundation for a global company, from which the modern-day Siemens Corporation derives. Johannes Bähr paints a fascinating picture of this extraordinary man, the son of a tenant farmer, who rose to become one of the most influential figures of the 19th century. At the same time, a panorama emerges of an epoch in which the world changed more rapidly than ever before.

Werner von Siemens' success was not only economic; he was also one of the first industrialists to recognize the connection between scientific research and economic development. His innovations, above all the pointer telegraph and the dynamo machine, opened up new applications for electricity: in conveying messages, generating energy, the illumination of buildings, and the propulsion of machines. Yet the pioneer of the electronics industry was also a man with many sides: an entrepreneur and inventor, officer of the Prussian military, brother and responsible paterfamilias, as well as a political representative and promoter of science. With Werner von Siemens' biography, Johannes Bähr provides insights into a century in which the world was fundamentally transformed. Wars, revolutions, kings, and tsars influenced the career of this inventor-entrepreneur, who, among other things, was responsible for the laying of telegraph cables to North America and the Middle East and for building the first electric streetcar in the world.