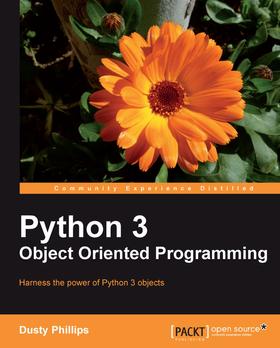 This book makes programming more of a pleasure than a chore using powerful Python 3 object-oriented features of Python 3. It clearly demonstrates the core OOP principles and how to correctly implement OOP in Python.

Object Oriented Programming ranks high in importance among the many models Python supports. Yet, many programmers never bother learning the powerful features that make this language object oriented.

The book teaches when and how OOP should be correctly applied. It emphasizes not only the simple syntax of OOP in Python, but also how to combine these objects into well-designed software.

You will be able to integrate the object-oriented and the not-so-object-oriented aspects of Python. You will also be able to create maintainable applications by studying higher level design patterns. You'll learn the complexities of string and file manipulation, and how Python distinguishes between binary and textual data. Not one, but two very powerful automated testing systems will be introduced to you. You'll understand the joy of unit testing and just how easy they are to create. You'll even study higher level libraries such as database connectors and GUI toolkits and how they apply object-oriented principles.

Harness the power of Python 3 objects; it's not just a scripting language

The book begins with the very foundations of OOP and then uses practical examples to show how to correctly implement Object Oriented Programming in Python. Many examples are taken from real-world projects. The book focuses on high-level design as well as the gritty details of the Python syntax. The provided exercises inspire the reader to think about his or her own code, rather than providing solved problems.

If you are an object-oriented programmer for other languages, you too will find this book a useful introduction to Python, as it uses terminology you are already familiar with.

Python 2 programmers seeking a leg up in the new world of Python 3 will also find the book beneficial, and you need not necessarily know Python 2.

Getting Started with Grunt: The JavaScript Task Runner
Jaime Pillora