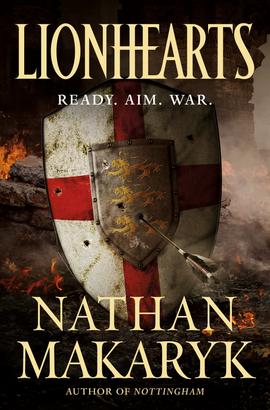 History and myth collide in Nathan Makaryk's Lionhearts, a riveting story of vengeance, redemption and war, perfect for fans of Game of Thrones.

To raise the money for his ransom, every lord in England is raising taxes, the French are eyeing the empty throne, and the man they called, “Robin Hood,” the man the Sherriff claims is dead, is everywhere and nowhere at once.

He’s with a band of outlaws in Sherwood Forest, raiding guard outposts. He’s with Nottingham’s largest gang, committing crimes to protest the taxes. He’s in the lowest slums of the city, conducting a reign of terror against the city's most vulnerable. A hero to some, a monster to others, and an idea that can't simply be killed.

But who's really under the hood?