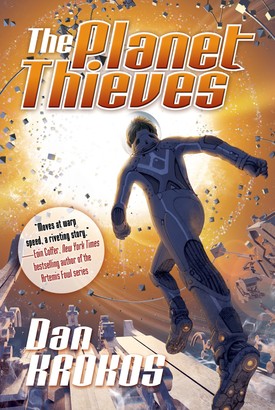 The Planet Thieves is the first thrilling installment of a new middle-grade series by Dan Krokos.
Two weeks ago, thirteen-year-old Mason Stark and seventeen of his fellow cadets from the Academy for Earth Space Command boarded the SS Egypt. The trip was supposed to be a short routine voyage to log their required spacetime for summer quarter.

But routine goes out the airlock when they're attacked by the Tremist, an alien race who have been at war with humanity for the last sixty years.

With the captain and crew dead, injured, or taken prisoner, Mason and the cadets are all that's left to warn the ESC. And soon they find out exactly why the Tremist chose this ship to attack: the Egypt is carrying a weapon that could change the war forever.

Now Mason will have to lead the cadets in a daring assault to take back the ship, rescue the survivors, and recover the weapon. Before there isn't a war left to fight.

Among the Dolls
William Sleator

The Curse of the Campfire Weenies
David Lubar