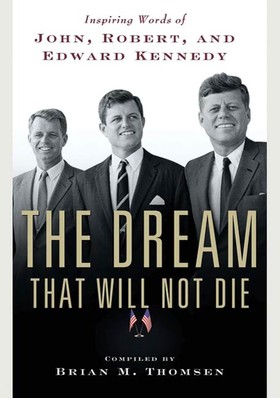 The Dream That Will Not Die

Beschreibung zu „The Dream That Will Not Die“

"Some men see things as they were and say ‘why?' I see things that never were, and ask ‘why not?"—Robert Francis Kennedy, Campaign Speech, University of Kansas, March 18, 1968

"The work goes on, the cause endures, the hope still lives and the dream shall never die."--Senator Edward Kennedy, Democratic National Convention, New York City, August, 1980

The words of three powerful brothers—men united not just by family ties but by a tradition of inspiring service that continues today with their children and grandchildren. Words which have united a nation, inspired generations to take up the very best and most honorable of causes, and pushed individuals to do and be and give their best.

So often, these Kennedys—John, Robert, and Edward—found the right words to say, to the United States and to the world. John F. Kennedy, the charismatic President with a strong commitment to justice and human rights. Robert F. Kennedy, Senator, Attorney General, and presidential candidate, who carried the family standard after Jack's assassination and broke new ground in civil rights prior to his own tragic murder. Edward M. Kennedy, the Lion of the Senate, whose passion created some of the most far-reaching legislation of the last five decades.

The Dream That Will Not Die collects some of the most striking speeches and quotes by the Kennedys, showing that even when the going was tough, these brothers found the right way to make their thoughts and feelings clear, showing their charm, humor, and determination. Here you will find your own inspiration, in the words of three men who believed that all Americans deserved the same privileges the Kennedys were born to, privileges they never took for granted.

Brian M. Thomsen is the editor of Shadows of Blue and Gray-the Civil War Writings of Ambrose Pierce, Alternate Gettysburgs, The American Fantasy Tradition, and The Man in the Arena: Selected Writings of Theodore Roosevelt. He lives in Brooklyn, New York.

Ähnliche Titel wie „The Dream That Will Not Die“

The Dark at the End
F. Paul Wilson