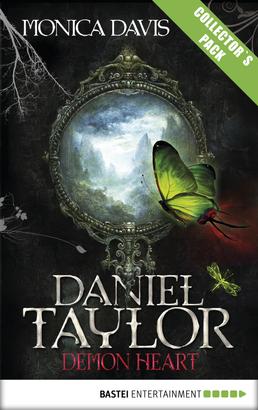 Part 1. DANIEL TAYLOR AND THE DARK LEGACY: Daniel, a high-school outcast with nothing much going for him, suddenly discovers that he has feelings for his attractive classmate Vanessa. And if that weren't confusing enough, strange things start to happen to him. His world is turned upside down when he learns about his true origins. Daniel becomes caught up in the shadows of a dark legacy - a legacy that opens the door to another world, the world of demons-

Part 2. DANIEL TAYLOR BETWEEN TWO WORLDS: Daniel is torn between two worlds. In one, he can be happy with Vanessa. In the other, the world of demons, he could wield great power. Will Daniel's dark side win him over, enticing him to embrace his powers over the living and the dead?

Part 3. DANIEL TAYLOR AND THE SCEPTER OF POWER: Vanessa's life is in danger. Only Daniel can save her, but he's under the spell of the demons. The Scepter of Power could seal his claim to the title of Overlord. As he searches for it, Daniel learns not only about his true origins, but also a great deal about himself. Ultimately, he has to determine which is stronger: the desire for power and respect - everything his demonic half yearns for - or his humanity?

For fans of Twilight, True Blood and the Vampire Diaries.

Monica Davis is one of the pen names of the German writer Monika Dennerlein. Born in 1976 in Berchtesgaden, she moved to Munich after high school, where she worked for a few years as a dental technician. But she never lost her passion for writing. Since she completely devoted her time to writing, she has published 40 books and numerous e-books that regularly appear among the ranks of online bestsellers.

Daniel Taylor and the Scepter of Power
Monica Davis