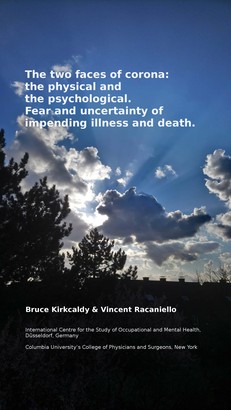 The two faces of corona

The physical and the psychological. Fear and uncertainty of impending illness and death

It is the second week in March 2020 and the world is in turmoil. Financial markets are braking at the pleats, with the Dow Jones Industrial Average falling by higher than 2000 points, and the Asian and European economic market plummeting, the biggest fall since 2008 and portending a financial catastrophe and sharp recession. People are hamster buying, stockpiling food and drinks for all contingencies. Standard jokes in Germany as in other European countries, are becoming reality as supermarkets have a dearth of toilet paper, oats and noodles as well as disinfectants. Fact finding would seem a reasonable coping mechanism to handle the frequently contradictory and panic-generating media reporting. In clinical psychology there is a distinction often made between an ‘appropriate degree of concern’ which brings proactive behaviour, and an attitude of catastrophising, the latter often is emotion-focussed and counterproductive.