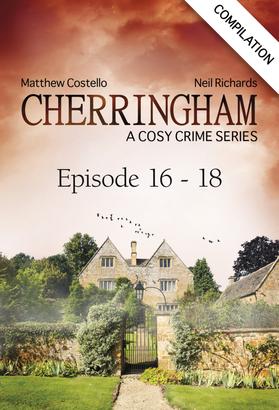 THE LAST PUZZLE
When amiable old village eccentric Quentin Andrews dies, the good folk of Cherringham are astonished at the crowd that turns up to his funeral. But even more astonished are the beneficiaries of his will: Quentin has left a veritable fortune to whomever is the first who can solve an intricate 'Cherringham crossword.' That puzzle is only the first of many that Jack and Sarah will uncover as they follow the treasure hunt for clues and learn the truth about who Quentin Andrews really was. And the biggest mystery of them all ... was he - in fact - murdered?

FINAL CUT
When a big movie production comes to Cherringham, complete with lords, ladies, and flashing swords, the whole village is abuzz with excitement. But when a series of dangerous accidents threatens the life of the young lead, Zoe Harding, Sarah and Jack get involved. Are these really accidents? Or could they be something more sinister - even deadly? Who is trying to destroy the career of the beautiful young star - and why?

THE VANISHING TOURIST
When an American tourist goes missing in Cherringham, the local police don't see reason for concern - people often wander away from such tours. But when that tourist's sister shows up from New York, desperately looking for answers, Jack and Sarah become convinced there's more to the disappearance than meets the eye. Soon, they are entangled in a mystery with a secret history of betrayal, sacrifice, dishonour ... and death.

MATTHEW COSTELLO is an award-winning novelist, screenwriter and video game writer. His best-selling video games include The 7th Guest, Doom 3 and Pirates of the Caribbean. His horror novel, Beneath Still Waters, was filmed by Lionsgate. He also has written episodes and created TV formats for PBS, Disney, SyFy, and the BBC. He lives in Katonah, New York.

Dead in the Water
Matthew Costello

Dead in the Water
Ann Granger