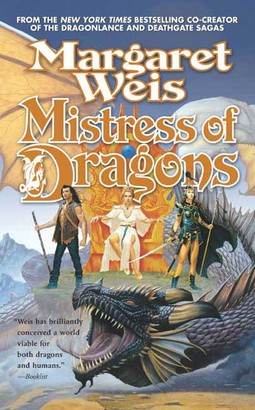 As Anne McCaffrey is to science fiction, Margaret Weis is to fantasy . . . for she is the genre's

Mistress of Dragons is the first volume in an epic fantasy trilogy entitled The Dragonvald. Here is a world where men and dragons coexist amid political intrigue and dark magic, where the uneasy balance of power between the two is on the verge of becoming undone, threatening to unleash waves of destruction that will pit humans against humans as well as dragons against men for the domination of the world. Humanity's very survival is at risk . . . .

The power to hold the chaos at bay, the terrible secret that maintains the balance, rests in the hands of a new and inexperienced

MARGARET WEIS is the longtime world-wide bestselling co-creator and co-author of The Dragonlace Chronicles, and recently, the Dragon Brigade trilogy. She worked at TSR, Inc., as a book editor for thirty years. She also is a publisher of role-playing games, including major franchises such as Serenity (Firefly) and Smallville.

Pathfinder Tales: Beyond the Pool of Stars
Howard Andrew Jones

The Gate of Fire
Thomas Harlan