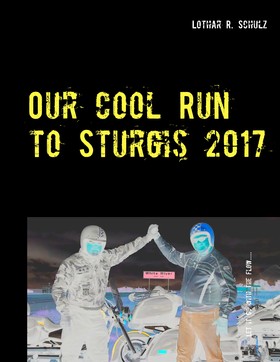 A special kind of travel journal...
A German rides to the largest motorcycle party in the world with a 92ci (1500cc) Victory bike and some good American friends from St. Paul (Minnesota) to "STURGIS" (South Dakota). He lets the reader/viewer get a taste of his impressions of the landscapes, people, experiences, and the American way of living.
It is a book of a road trip with many expressive images that speak for themselves ...
Anyone who has not been there by now at least has the
opportunity to get a taste of the great freedom, the "Big Event"
- the "Sturgis Bike Week" - and also the diverse and
breathtaking scenes of nature from the author´s perspective, such
as the prairie, the Badlands, and the Black Hills. He or she should get a little taste of all this, and also a little appetite, ... Yes, he or she should long for a bit MORE ...
Because at the right time, nothing is cooler than the inner attitude to life according to the Native American motto:
Let it go with the flow ...!

The cover photo shows the author (left) and his American buddy John (right) on the way to Sturgis on the outskirts of "White River", which they have taken shortly after a refueling stop.

PS: In the book's appendix, many "links" have been added for people who also feel like experiencing the wild beauty of this unspoiled South Dakota country. In addition, a highly recommended American travel guide around the Bike Week in Sturgis is presented.

The author, Lothar R. Schulz, was born in 1967 in a small town of Ettlingen near Karlsruhe, Germany, where he also grew up.
After training as a mechanical engineer and subsequently continuing education as a quality manager and technical business economist, he has been working for over 10 years with an international automotive supplier.
As an American friend for the "cool way-of-life" and an avid big-twin fan, in 2017, he was drawn to the biggest bike event in the world -Sturgis, South Dakota ...
The author himself rode a customized 1987 HD Evo and wants to present and an entertaining, informative, as well as tingling travelogue with his "first work", in the language of unmistakable pictures, which should also be fun ...!

The Mystery of the Pheasants
Mark Meierhenry