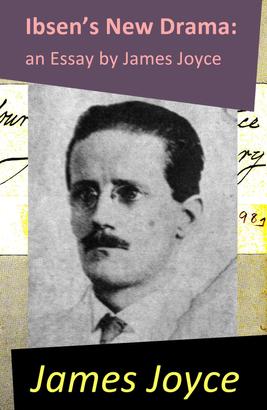 This carefully crafted ebook: "Ibsen's New Drama: an Essay by James Joyce" is formatted for your eReader with a functional and detailed table of contents. James Augustine Aloysius Joyce (2 February 1882 – 13 January 1941) was an Irish novelist and poet, considered to be one of the most influential writers in the modernist avant-garde of the early 20th century. Joyce is best known for Ulysses (1922), a landmark work in which the episodes of Homer's Odyssey are paralleled in an array of contrasting literary styles, perhaps most prominent among these the stream of consciousness technique he perfected. Other major works are the short-story collection Dubliners (1914), and the novels A Portrait of the Artist as a Young Man (1916) and Finnegans Wake (1939). His complete oeuvre also includes three books of poetry, a play, occasional journalism, and his published letters.

James Augustine Aloysius Joyce was an Irish expatriate writer, widely considered to be one of the most influential writers of the 20th century. He is best known for his landmark novels Ulysses (1922) and Finnegans Wake (1939), the short story collection Dubliners (1914) and the semi-autobiographical novel A Portrait of the Artist as a Young Man (1916).

Although his adult life was largely spent outside the country, Joyce's fictional universe is firmly rooted in Dublin and provide the settings and much of the subject matter for all his fiction. In particular, his tempestuous early relationship with the Irish Roman Catholic Church is reflected through a similar inner conflict in his recurrent alter ego Stephen Dedalus. As the result of his minute attentiveness to a personal locale and his self-imposed exile and influence throughout Europe, Joyce became simultaneously one of the most cosmopolitan and one of the most local of all the great English language writers.

AN ENEMY OF THE PEOPLE
Henrik Ibsen

The System of Chaos in "The Second Coming" by William Butler Yeats. How is the Breakdown of the World Depicted?
Francesca Cavaliere