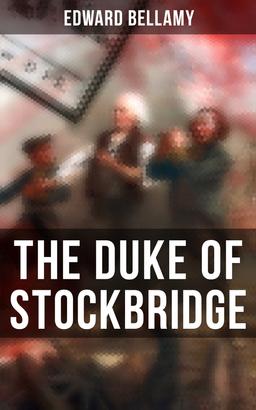 THE DUKE OF STOCKBRIDGE

Beschreibung zu „THE DUKE OF STOCKBRIDGE“

This eBook edition of "The Duke of Stockbridge" has been formatted to the highest digital standards and adjusted for readability on all devices.
Excerpt:"Early one evening in the very last of August, 1786, only three years after the close of the Revolutionary war, a dozen or twenty men and boys, farmers and laborers, are gathered, according to custom, in the big barroom of Stockbridge tavern. The great open fireplace of course shows no cheery blaze of logs at this season, and the only light is the dim and yellow illumination diffused by two or three homemade tallow candles stuck about the bar, which runs along half of one side of the apartment. The dim glimmer of some pewter mugs standing on a shelf behind the bar is the only spot of reflected light in the room, whose time-stained, unpainted woodwork, dingy plastering, and low ceiling, thrown into shadows by the rude and massive crossbeams, seems capable of swallowing up without a sign ten times the illumination actually provided."

The House on the Moor
Mrs. Oliphant

The Rebellion in the Cevennes (Vol. 1&2)
Ludwig Tieck