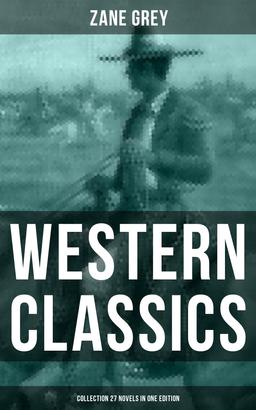 Riders of the Purple Sage, The Last Trail, The Mysterious Rider, The Border Legion and more

This unique collection of "Western Classics: Zane Grey Collection (27 Novels in One Edition)" has been designed and formatted to the highest digital standards.

The Spirit of the Border: A Romance of the Early Settlers in the Ohio Valley

The Last of the Plainsmen

The Heritage of the Desert

Riders of the Purple Sage

The Light of the Western Stars

The Rustlers of Pecos County

The Lone Star Ranger: A Romance of the Border

The Desert of Wheat

The Man of the Forest

To the Last Man

The Day of the Beast

Wanderer of the Wasteland

Roping Lions in the Grand Canyon

The Code of the West

Zane Grey (1872-1939) was an American author best known for his popular adventure novels and stories that were a basis for the Western genre in literature and the arts. With his veracity and emotional intensity, he connected with millions of readers worldwide, during peacetime and war, and inspired many Western writers who followed him. Grey was a major force in shaping the myths of the Old West; his books and stories were adapted into other media, such as film and TV productions. He was the author of more than 90 books, some published posthumously and/or based on serials originally published in magazines.