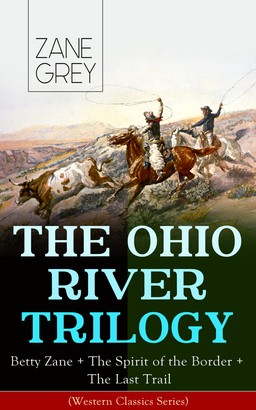 This carefully crafted ebook: "THE OHIO RIVER TRILOGY: Betty Zane + The Spirit of the Border + The Last Trail (Western Classics Series)" is formatted for your eReader with a functional and detailed table of contents.
"Betty Zane" is a historical novel about Elizabeth "Betty" Zane McLaughlin Clark (1765-1823), a heroine of the Revolutionary War on the American frontier. The author Zane Grey is her great-grandnephew.
"Spirit of the Border" is a historical novel based on events occurring in the Ohio River Valley in the late eighteenth century. It features the exploits of Lewis Wetzel, a historical personage who had dedicated his life to the destruction of Native Americans and to the protection of nascent white settlements in that region. The story deals with the attempt by Moravian Church missionaries to Christianize Indians and how two brothers' lives take different paths upon their arrival on the border. A highly romanticized account, the novel is the second in a trilogy, the first of which is Betty Zane, Grey's first published work, and "The Last Trail", which focuses on the life of Jonathan Zane, Grey's ancestor.
Zane Grey (1872-1939) was an American author best known for his popular adventure novels and stories that were a basis for the Western genre in literature and the arts. With his veracity and emotional intensity, he connected with millions of readers worldwide, during peacetime and war, and inspired many Western writers who followed him. Grey was a major force in shaping the myths of the Old West; his books and stories were adapted into other media, such as film and TV productions. He was the author of more than 90 books, some published posthumously and/or based on serials originally published in magazines.
Table of Contents:
Betty Zane
The Spirit of the Border
The Last Trail

Dorothy and the Wizard in Oz
Lyman Frank Baum

The Last of the Mohicans
James Fenimore Cooper

A CHILD OF THE JAGO (Modern Classics Series)
Arthur Morrison