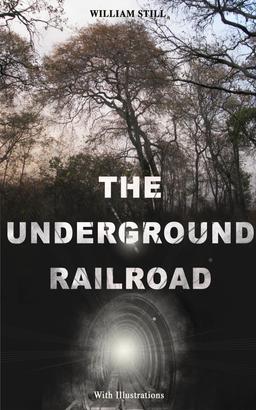 THE UNDERGROUND RAILROAD (With Illustrations)

This carefully crafted ebook: "THE UNDERGROUND RAILROAD (With Illustrations)” is formatted for your eReader with a functional and detailed table of contents.
This book chronicles the stories of some 649 slaves who escaped to freedom via the Underground Railroad, a secret network formed by abolitionists and former slaves who helped them escape to the North. This book's original aim was to reunite those slaves with their families. But now it has turned into an important historical document that visiblises the existence of those who suffered inhuman cruelty at the hands of Southern Slave Owners and yet had the courage to break free. These unknown heroes and heroines were in true sense the founding fathers of African American Communities. This is why their stories must be heard and brought back from oblivion. A MUST READ!
Excerpt:
"Like millions of my race, my mother and father were born slaves, but were not contented to live and die so. My father purchased himself in early manhood by hard toil. Mother saw no way for herself and children to escape the horrors of bondage but by flight. Bravely, with her four little ones, with firm faith in God and an ardent desire to be free, she forsook the prison-house, and succeeded, through the aid of my father, to reach a free State. The old familiar slave names had to be changed…"
William Still (1821–1902) was an African-American abolitionist, conductor on the Underground Railroad, writer, historian and civil rights activist. He was chairman of the Vigilance Committee of the Pennsylvania Anti-Slavery Society and directly aided fugitive slaves by keeping records of their lives and helping families reunite after the abolishment of slavery.