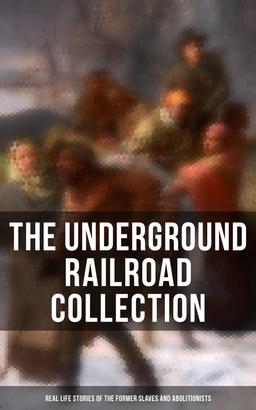 THE UNDERGROUND RAILROAD COLLECTION: Real Life Stories & Incidents in the Lives of the Former Slaves and Abolitionists (Illustrated Edition)

The Underground Railroad was a secret network of routes used by Southern slaves in escaping to the North. In their attempts they were often guided and helped by former fugitive slaves and abolitionist who were known as the conductors. Unravel the secrets of these incredible and unforgettable life journeys and the people who took these treacherous routes to freedom. This edition includes carefully compiled and detailed documentation about the lives and escapes of over 100 former slaves along with the incredible life stories of the two courageous female conductors, Harriet Tubman and Laura S. Haviland, who risked their own lives in helping these slaves cross over to the North in the dead of the night. So come and relive the stories of extraordinary courage, heart breaking saga of grief and separation and the overwhelming desire to break free! A MUST READ!
William Still (1821–1902) was an African-American abolitionist, conductor on the Underground Railroad, writer, historian and civil rights activist who recorded the stories of fugitive slaves to help them reunite with their families.
Sarah H. Bradford (1818–1912) was an American writer, historian and a very close friend of Harriet Tubman. Bradford was also a contemporary of Harriet Beecher Stowe, the author of Uncle Tom's Cabin.
Laura S. Haviland (1808-1898) was an American abolitionist, suffragette, and social reformer. She is credited to have established the first racially integrated school in Michigan with her husband, which gave lectures about the realities of life on a slave plantation.