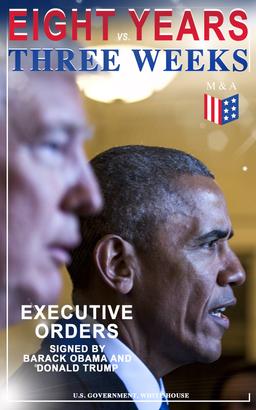 During his years in office, from 2009 to 2017, Barack Obama signed more landmark legislation than any Democratic president since Lyndon Baines Johnson. His main reforms include the "Obamacare", changes of the financial regulation as a response to the Great Recession; as well as reforms for greater inclusiveness for LGBT Americans. He also advocated gun control and issued wide-ranging executive actions concerning climate change and immigration. The presidency of Donald Trump began on January 20, 2017. During the first three weeks in the office, Trump has issued several consequential presidential orders, such as Executive Order 13769, which suspended the admission of refugees into the United States, Expediting Environmental Reviews, Affordable Care Act Pending Repeal, International Trafficking and many more... According to some, these orders were aimed to repeal the work of Barack Obama, according to others they represent a determined action, long awaited changes and positive progress. In this collection you can see in the clearest way the true political program and the goal of both presidents through their legislation actions and speeches.

Obama's Legacy - Yes We Can, Yes We Did
Barack Obama